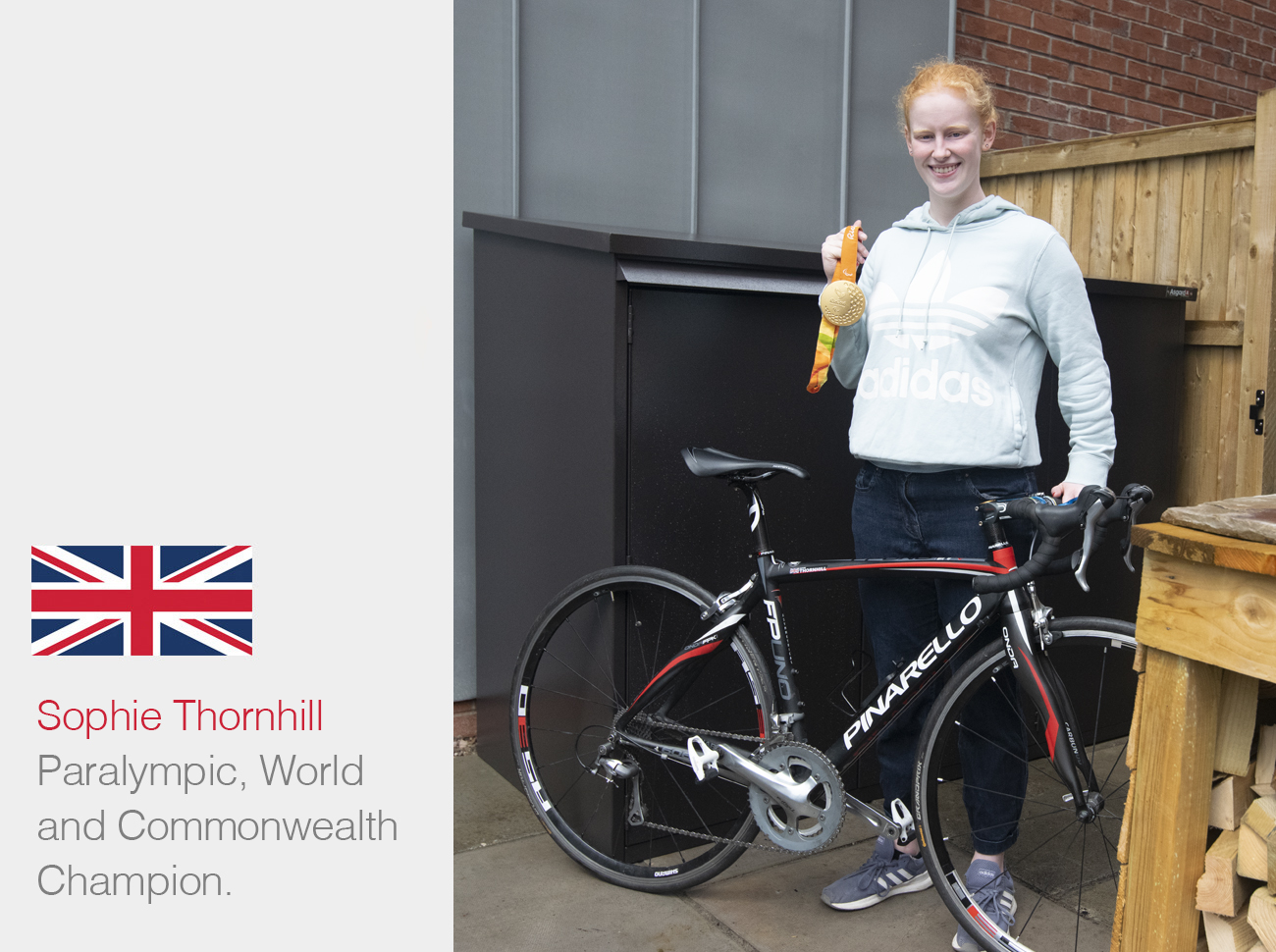 Asgard has helped many world champions and GB athletes keep their equipment safe and secure in our bike sheds. Sophie Thornhill (MBE) becomes the latest athlete to choose an Asgard shed to store her bikes in. After receiving recommendations on the strength and security of an Asgard shed by her GB teammates, Sophie contacted Asgard to get advice on the best way to store her expensive bikes at home. A short conversation later and Sophie opted for the Annexe high-security bike shed in Brown.

Who is Sophie Thornhill?

Sophie is an English track racing cyclist for the Great Britain Cycling Team. Joining in 2013 she immediately achieved two world titles and set two world records - wow! Sophie has worked with a number of pilots throughout her career including Rachel James, Helen Scott, and Corrine Hall (who also have Asgard bike sheds!), and has gone on to win more medals, set new records, and gain World titles. Sophie is the reigning Paralympic, double world, and double Commonwealth champion alongside Helen Scott*.

Born with Oculocutaneous Albinism, Sophie is visually impaired with 7-9% sight. When competing, she is at the rear of the tandem where she is guided by a sighted pilot. However, Sophie has never let her condition stop her from doing what she loved, hailing her upbringing in an interview stating “My dad always said: ‘If you can’t see it, get closer’ and it’s as simple as that. If you want something go and do it. That’s the attitude I’ve always had instilled in me.”

Why did Sophie choose an Annexe Bike Shed?

Sophie’s main criteria for her bike shed was that it needed to be very secure and protect her expensive bikes, but also small due to the limited space available. After discussions with our teams, the Annexe Secured By Design Police approved bike shed fitted the bill.

The Annexe can hold up to 3 bikes** and riding equipment, such as backpacks and helmets with a compact footprint of 6ft x 3ft, ideal for small gardens and outdoor spaces.

Sophie is one of several GB cyclists who own an Asgard shed. You can find their installations and stories on our British Athletes page.

*Correct at time of writing.

**On average, depending upon the size of the bike.

For a full list of Sophie’s achievements please see here.