There comes a point in many cyclists lives where even they realise that they are pushing it with the amount of bikes they have in the house. A very tolerant wife had let my collection grow but even I knew that things were getting cosy indoors. And a load of redecorating prompted a search for somewhere outside to store some of them. Living in London it was always going to be a balance of cost, size in the already small back garden and security offered. As ever the internet gave lots of options but Asgard seemed to offer the best balance between the three.

All that was left was to narrow it down to what model/ size. the 4 bike Access seemed the right one and was delivered. In an ideal world I would have been able to wait until the warmer weather, whenever that arrived, but it was too slow in coming so I commenced on a freezing cold Sunday morning, brushing snow and ice off of the concrete base and continuing the build in very light snow. My first recommendation is not to attempt anything in weather like this. The concrete base had been poured as per the instruction sheet and it was nice to know that the base would be the right size and more importantly level. Drilling the holes to attach the base is hard work.

A good drill bit is vital, as is some patience, all the hard work that you put in here is making it harder to remove by anyone else. This is the start of the security. Warmed up from the drilling it was time to begin the build. The panels are well labelled and easy to navigate, via the instructions. Most of the job can be done by one person, its only when the heavy door needs adding that you need to enlist some assistance. If you are used to certain Scandinavian flat pack builds the way things go together here will be a very different experience. You know when things are right, they tighten together nicely and there's a satisfaction in knowing that the connections are tight. Linked with this is the fact that the screws tap out the threads that they are being screwed into. 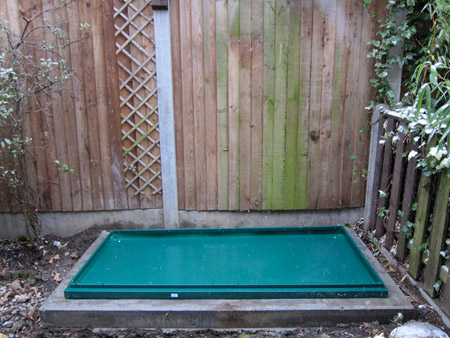 This gives a super-tight connection which is good to have, but at some angles can make screwing in initially a bit tough. I found that with some of the hard to reach screws is was easier to run a screw in, to open up the thread a little, and then screw the two parts together. This meant that it was a little easier in the end. Apart from drilling through the concrete the hardest part is getting the hinges on the roof lined up with the holes at the back of the shelter. The instructions are a little vague but a bit of logic lets you see the correct order before trying to line the holes up and push the bolts through. This is the point at which any misalignment will be apparent.

Even with a specifically poured base we were out and it took some pushing, coercing and a little bit of swearing to get the first hinge attached. As is often the case the first is the most difficult and the subsequent hinges got a little easier, or we got better at coercing.

With this out of the way it was a breeze to get the rest of the shelter built. Possibly due to the base being level we didn't need to do any work to get the locking hinges lined up at the end. How long did it take? I wasn't really timing it as I wanted it to be correct rather than quick, but suffice to say I've climbed and descended Mt Ventoux quicker. 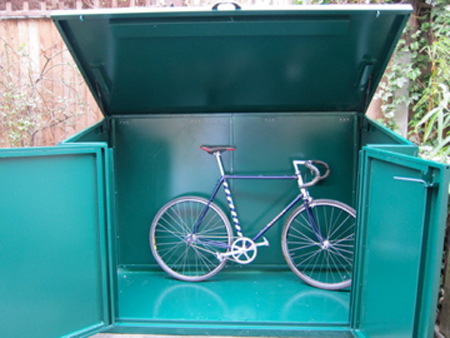 My advice is not to rush it as something this sturdy should be in place for a very very long time, so why rush getting it built?

Four bikes fit comfortably inside. If you have lots of very wide-barred mountain bikes you may have trouble with the width but with a selection of drop and flat barred bikes it was no problem. And there is room around the ends for a track pump and bike stand. I'm now thinking that some of the optional extra shelves might be useful for things like tools and oil. With the shelter the main thing is security.

I live in London after all. Having built it, felt the weight/ rigidity and quality of materials I am very happy. Short of using explosives I can't see anyway that someone is getting to my bikes.

Now all I need is my fingers to defrost enough to ride one of the bikes.

Do you want to know more about this and other cycle storage/bike shed products??