Posted: 15 February 2020 by Julia Sagar
View the article on their website. 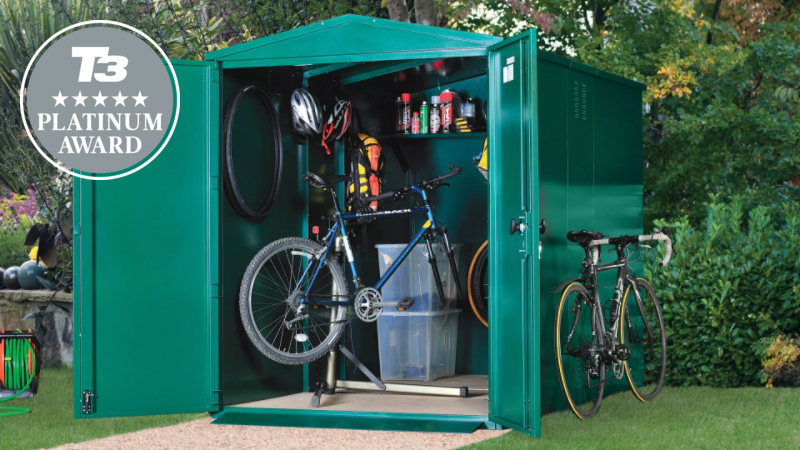 T3 VERDICT
The Asgard Centurion is a seriously secure metal shed that comes packed with clever accessories for storing bikes, tools and more. Its beefed-up security features don't come cheap, but the peace of mind from knowing your valuables are safe is easily worth the investment.

The Asgard Centurion metal shed is a high-security, all-purpose storage unit that’s designed to keep your most valuable outdoor items safe. At 5x9 feet, it’s aimed at anyone with large storage needs. It offers enough space for multiple bicycles (up to six), a lawn mower and a large collection of garden tools, while still having a footprint small enough for a medium-sized city garden.

But the Centurion’s big talking point is its security features. It’s made from tough, galvanised steel, and comes absolutely packed with details to deter would-be thieves. Storage specialist Asgard reckons its metal sheds are the most secure you can find – so we called one in to review whether the Asgard Centurion is the best shed you can buy.

HOW MUCH DOES THE ASGARD CENTURION SHED COST?
There are three different versions of this Asgard shed: one for bicycles, one for motorcycles, and one for garden storage. All three are exactly the same; only the accessories differ slightly.

At full price, the Centurion will set you back around £1,260 – although during the winter it’s possible to find a discount. That places it at the premium end of the market, as you might expect for a high-security shed. However, bear in mind that the Asgard Centurion comes with a fully integrated metal base included in the basic price. It also arrives with a number of handy extras, including a shelf, hanging hooks, a ramp and wooden over-floor. (You can buy more accessories separately.)

ASGARD CENTURION SHED: DESIGN AND FEATURES
The Asgard Centurion comes in a range of three colours: green, brown or ivory. Its modular design means it’s customisable: if you want to extend the unit, you can increase the depth in 1.1 metre increments until it’s the size you want (handy if you own, say, a kayak – or just have a lot of things to store outside).

Inside, a range of pre-drilled holes can be used to fit a number of useful accessories to help you maximise storage space. There’s room for up to three metal shelves on the back wall. Meanwhile, metal hooks can be fitted to the side walls – they’re good for hanging heavy or delicate items out of the way – and storage eyelets provide secure points for bungee ropes to hold equipment together, or to lock items to for extra security.

Another design consideration it’s worth pointing out is Asgard’s ventilation system. One big problem for metal sheds is condensation, so to prevent moisture building up and damaging your tools or equipment, the Centurion has two large vents on either side (these also let fumes escape, if you’re storing a motorbike). Discreet holes in the roof help air flow freely, too.

Finally, if you want power, the Centurion comes with two electric socket mounting plates, so you can install lighting, charge equipment or operate tools.

ASGARD CENTURION SHED REVIEW: SECURITY
So how secure is the Asgard Centurion? On paper it's impressive, with UK Locksmiths Association approval, Police approval and level one-certification from the LPCB (Loss Prevention Certification Board) – that’s enough to get you a discount on bike or motorbike insurance from some companies.

After constructing ours – more on that below – it's fair to say that the Asgard Centurion feels like the Fort Knox of garden sheds. It’s built from heavy duty, galvanised steel panels, which means it isn’t just weather-proof: it’s also very, very difficult to get into without a key. You can watch the Loss Prevention Certification Board try below, and there are more tests on the lock and side panels here.

A five-point deadbolt locking system makes the Centurion pick and drill-resistant, while extra-tough welded hinges keep the reinforced double door secure. No screw is exposed, so it can’t be dismantled from outside. And it’s heavy. Really heavy. The Asgard Centurion weighs in at 294kg – that’s 46 stone – adding strength and stability to the unit.

The built-in metal floor also comes with fixings to secure the unit to the ground, so thieves can’t just remove the whole thing. Plus, it’s noisy. Try kicking or cutting those panels and the entire neighbourhood will know about it.

For extra peace of mind, we added a ground anchor and put a motorcycle lock through our bikes. So far, happily, that’s proven unnecessary: the shed has been up for several months now and remains untouched.

ASGARD CENTURION SHED DELIVERY AND SET-UP
Our Asgard Centurion shed arrived by lorry. The panels were carefully unloaded by the driver, who laid them out in the garden in a sensible order for assembly. You can pay an extra £275 and Asgard will put the Centurion together for you, but the company claims that construction “is easy” and we were feeling pretty confident.

Spoiler: it’s true. The panels themselves are fairly heavy, but we found building the Centurion to be straightforward. Once we’d created a flat concrete base for it to sit on, the shed went up like a dream. The instructions were easy to follow, and the panels slotted together quickly and efficiently.

You don’t need many tools to fit the Asgard Centurion – just a drill and 10mm spanner. Helpfully, two tubes of Silicone sealant are included in the package, so you won’t need a last-minute trip to Screwfix.

We found two people more than adequate for the job (Asgard recommends three for its larger sheds), although it did take us closer to half a day, in total – rather than under two hours as Asgard suggests. Our only stumbling block came halfway through, when we discovered we were missing some larger screws for fitting the extension roof panel. A quick call to Asgard’s customer service department though, and these were posted first class, arriving the next morning.

The ramp also caused a moment of head-scratching at the end. It isn’t mentioned in the instructions, and – as it turns out – it’s meant to be fitted under the base before construction. We've placed ours in front of the shed, where it works just fine.

Overall, as long as you have someone to help you carry the panels, and your concrete base is flat, putting the Asgard Centurion shed together should be a manageable task for anyone who can use a drill.

If you’re looking for super-secure outdoor storage and bricks aren’t an option, the Asgard Centurion is easily one of the best sheds you can buy. It’s strong, sturdy and seriously secure, and we like the flexibility of the storage options inside.

Bear in mind that it’s virtually impossible to stop a determined thief: no shed is completely impenetrable. But the Asgard Centurion should be enough to put off the vast majority of opportunists – and a lot of professionals too. It’s a good investment, and the peace of mind that comes from knowing your valuables are as secure as they can be is well worth the price.

This review is about the Centurion Bike Storage x6. Click here for more information.

Matt DiAngelo gets an Access Plus Bike Shed for 29ers

BBC Soapstar Matt DiAngelo uses an Asgard Access Plus bike shed for 29ers to store his bikes and cycling equipment in.