The very first two wheeled human propelled machine was invented by a chap called Baron Karl de Drais de Sauerbrun way back in 1818 – he was French.   The entire bike was made of nothing but wood… wheels and all.

Then in 1839 a Scottich chap called Kirkpatrick Macmillan came up with another bike machine.. this time the “bike” had its wheels rimmed with iron and not wood. Instead of pedals this early bike used cranks – close but it was not a success.

The next version of a bike was the famous “boneshaker", this was no carbon lightweight - weighing around 160lb.

This was a popular bike, in 1868 the first boneshaker bike race was held.

In 1870, James Starley, developed the bike we all know about, but most have never seen … the famous Penny-Farthing. 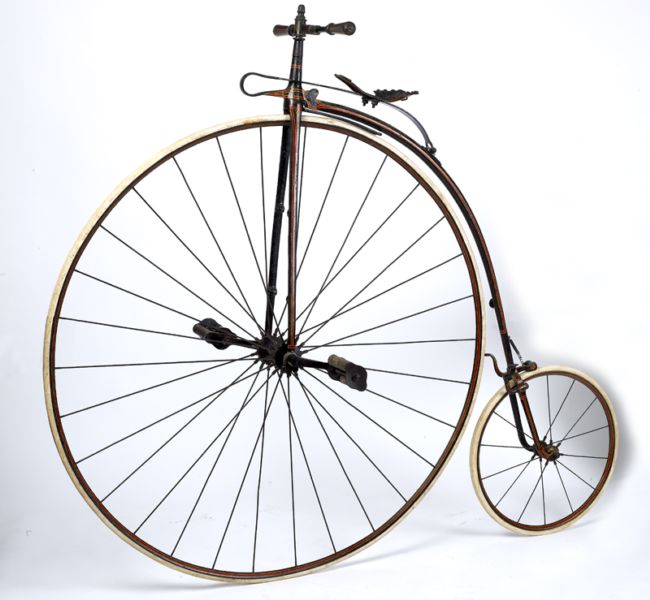 Any idea why it was called this??? Answer below.

In the 1870s a party of enthusiasts are said to have ridden Penny-Farthings from Lands End to John O'Groats (690 miles) in 15 days. Since the 1890s the basic design has remained fairly similar although many refinements have been made over the last 100 years.

Bikes have been developed for many uses such as touring, racing or all terrain cycling. Mountain bikes were  are one of the most popular types of bike today. They have up to 21gears, wide heavy treaded tires and can cost thousands of pounds for a decent carbon frame bike.

It is estimated that there are 20 million bikes in the UK, which translates into a 3rdof everyone in the country has a bike - although only 6 million people are regular cycle users.

The first National Bike Week was organised in 1923 by the Cyclists' Touring Club.

According to the British Heart Foundation by riding just 20 miles a week you will cut in half your risk of heart disease compared to a non-cyclists who may take little or no exercise.

The Penny Farthing was named so - as it was the smallest coins available at the time.