From the blog site www.shedforce.co.uk

"All this talk of metal sheds and bike storage but doesn't metal just rust?? Anyway, what is rust and how can I stop it?

It is true that metal does rust mass produced 'discount'  sheds imported from over seas will almost certainly rust after only a short period of time. High security sheds such as the Asgard range are specially coated to prevent rust from occurring. With only minimum maintenance these sheds will last decades.

Asgard - all metal sheds are different from the mass produced competition.  All Asgard sheds are made from thick galvanised steel.  This is the process where the steel is made weatherproof before being made into your shed.
Click for details about the asgard galvanised sheds coating process.
Asgard coat our metal in a polyestor powder coat paint.  This makes the steel not only weatherproof but tough and durable.
Asgard use only zinc coated screws for shed assembly.
For a direct quality comparision - see our this best metal sheds page. 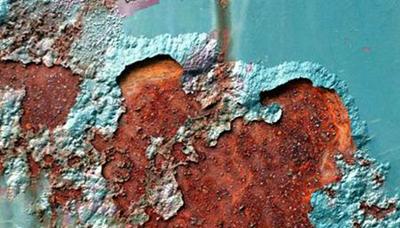 One of the most common problems with Metal Outdoor Storage is Rust. A lot of cheap, low-end storage is imported on mass from overseas. Not only is this bad for the UK economy and your carbon footprint, you will find the finish quality of the metal very low. Asgard is often asked to replace rusty competitors products after only a year or so of outside use.

What is rust and how is it formed?

Now for the technical stuff:
Rust is another name for iron oxide, which occurs when oxygen comes in long-term contact with iron or an alloy that contains iron, like steel. Over time, the oxygen combines with the metal at an atomic level, forming a new compound called an oxide and weakening the bonds of the metal itself. Although some people refer to rust generally as "oxidation," that term is much more general; although rust forms when iron undergoes oxidation, not all oxidation reactions form rust. Only iron or alloys that contain iron can rust, but other metals can also corrode in similar ways.

The main catalyst for the rusting process is dihydrogen oxide, better known as water. Iron or steel structures may appear solid, but water molecules can penetrate the microscopic pits and cracks in any exposed metal. The hydrogen atoms present in water can combine with other elements to form acids, which will eventually cause more metal to be exposed.

If sodium is present, as is the case with saltwater, corrosion will likely occur more quickly. Meanwhile, the oxygen atoms combine with metallic atoms to form the destructive oxide compound. As the atoms combine they weaken the metal, making the structure brittle and crumbly.

Some pieces of iron or steel are thick enough to maintain their integrity even if rust forms on the surface. The thinner the metal, the better chance rusting will occur. Water alone does not cause steel to rust, but the acidic reaction allows oxygen to attack vulnerable exposed metal. Placing a steel wool pad in water and exposing it to air will cause almost-immediate rusting; the air around the pad will actually feel several degrees warmer. Eventually the individual iron bonds will be destroyed and the entire pad will disintegrate.

Rust formation cannot be stopped easily, but metals can be treated to resist the most damaging effects. Some are protected by water-resistant paints, preventative coatings, or other chemical barriers, such as oil. It is also possible to reduce the chances of rust forming by using a dehumidifier or desiccant to help remove moisture from the air, but this is usually only effective in relatively small areas.

Steel is often galvanized to prevent rust from forming; this process usually involves a very thin layer of zinc being applied to the surface. Another process, called plating, can be used to add a layer of zinc, tin, or chrome to the metal. Cathodic protection involves using an electrical charge to suppress or prevent the chemical reaction that causes rust from occurring.