Horse tack theft is not a new crime, tack thieves get away with an average haul worth £30,000, according to crime figures.

A survey by insurers NFU Mutual, based on claims at more than 300 of the company's rural branches, suggests that tack is ninth on the top-10 list of items stolen in the countryside. Number one is quad bikes and 70% of agents say rural crime is on the up.

The survey was based on claims from January-June this year and agents were asked to compare claims against the same period in 2009. 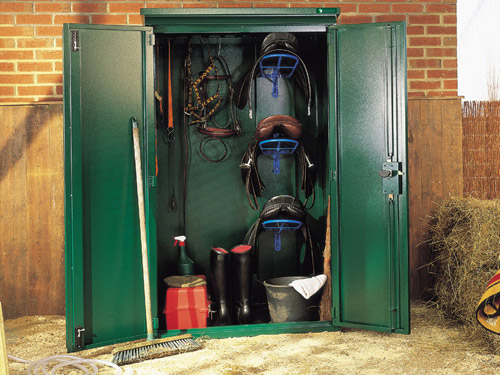 "Since our last survey in 2007, horse thefts have decreased due to a combination of micro chipping, visible security markings and better traceability of horses as a result of passports. Nine were recorded last year and none so far this year,"said Nicola Whittaker from NFU Mutual.

But tack thefts are on the rise and different people are being targeted. A couple of years ago we found most tack theft was opportunist a bridle here, a saddle there. Now thieves are aiming for livery yards and businesses and the average theft has risen to around £30,000.

"Thieves plan very meticulously, and theft on a grand scale can ruin careers and businesses."

How to keep your tack safe

Security is your best form of defence against horse tack theft. If you don’t have somewhere secure to keep your horse riding equipment, this will make it all too easy for thieves.

For the ultimate storage security, the Asgard tack storage box is what you need. This high security metal unit is made from reinforced weatherproof steel and features reinforced hinges and doors. This storage unit is so tough, that it has been approved by the Loss Prevention Certification Board to Level 1. This certification may help to reduce insurance premiums.

Find out more about the Asgard tack storage box