Bradley Wiggins has encouraged an increase in cycling 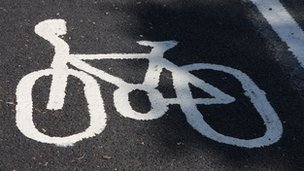 Accidents and damage do occur on the UK's roads despite more attention being paid to cyclists.

When talking about insurance and risk in the context of cycling, it is natural to think of bike theft. But by far the greatest financial loss the everyday cyclist can suffer - potentially thousands of times the value of their bicycle - is liability for damage to another's property or person.

Although third-party insurance is not compulsory for cycling, there is a risk - albeit a small one - of causing damage to an expensive vehicle while you are on your bike.Replacing even a wing mirror on a £50,000 Mercedes is an expensive prospect.Similarly, while the chance of causing serious injury to another road user, such as a pedestrian or another cyclist, is very slight, there is a risk every time you get on your bike.Claims for medical damages can run into millions of pounds.

Student cyclist Gary Morgan was liable for thousands of pounds in damages after his bike collided with a car. 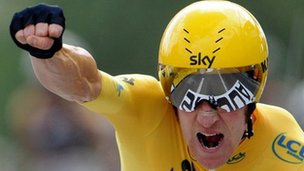 "The car's wing mirror hit my right forearm, and I cut my head badly and hurt my arm and shoulder. The driver was unharmed, though his car had a broken wing mirror and scratched paintwork," he says "The car had both the driver's side doors replaced, which left me with a huge bill for damages."

When there is a risk, there is someone willing to cover you against the worst.

Most people choose to indemnify themselves through a cycling organisation because they negotiate the best deals and pass on the savings to their members.

For example, London Cycling Campaign (LCC) membership costs £34 per year, or £17 for students, the unwaged or seniors, and includes £5m of third-party cover.

LCC is not the only organisation offering third-party insurance with membership. If you do not live or work in Greater London, then CTC membership might be for you. It costs £15 to £39 per year and includes £10m cover.

If you fancy yourself as the next Bradley Wiggins, British Cycling's offerings are ideal for budding road or track competitors.

Once satisfied you are covered against risk when you are on the road, then it is time to think about protecting your bicycle when you are not. 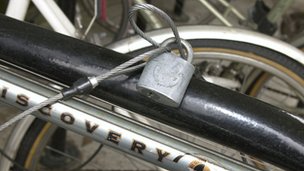 Thin cables can be broken in seconds by determined bike thieves

Cycle theft is very common throughout the UK, with an estimated 100,000 bikes every year disappearing from garden sheds and busy streets in Greater London alone.

Of course, the best insurance is a decent lock, or two, and some common sense. Simple tips include:

The cost of bicycle insurance depends on the value of your bike and your postcode and can include accidental and crash cover as well as theft insurance.

LCC's Urban Cycling Insurance can insure bikes up to a value of £10,000, but there are many other providers too, such as Evans,Cycleguard, ETA and others. All of these can give you a quote online in seconds.

Which ever insurer you decide to go with, read the small print because companies often have lists of approved locks, restrictions on leaving bikes overnight in a public places, and other conditions that could invalidate your claim.

Some insurers also depreciate the value of your bike year on year, but do not reduce your premium accordingly.

Adding your bike to an existing home contents insurance policy is sometimes cheaper than a separate arrangement, so talk to your existing provider first. Some charge an additional fee, while others insure your bike free as a named item.

There are pit falls to using your contents insurance, however, such as busting your hard-earned no-claims discount, which could significantly increase your premiums. Again, check closely what restrictions there are as to where, when and how your bike must be kept in order to remain covered.

Whatever type of insurance you choose, read the policy carefully before buying. And remember the costs are likely to be paltry compared with those of running a motor vehicle or buying a season ticket.

For the ultimate bike security, invest in an Asgard bike shed

Did you know Asgard secure steel storage offers a 10% discount to cycling clubs and their members to safely store their bikes?