Garden Sheds and their contents

What's hiding inside your garden shed?

Let's face it everyone is fascinated by garden sheds. Men like to have their very own sheds and women, men and children of all ages just love to go poking around in someone else's old shed to see what secrets they contain. Certainly, when visiting the grandparents house for Sunday lunch, the good old back yard shed can be the only point of interest for the kids.

Women frequently joke about men and the time they spend in their 'backyard caves'. It's no doubt been the cause of many a break-up. Studies have even been conducted about men, sheds and what they do in there.

This human fascination has been well documented all around the world. There are numerous books about blokes and their sheds. Current offerings on Amazon include 101 Things to do in a Shed by Rob Beattie; Men and Sheds by Gordon Thorburn; and Shed Men by Gareth Jones. The list could go on.

The mysterious qualities of garden sheds and what lurks in them has featured in many famous movies too. In the 1982 film ET for instance, ET was found hiding in Elliot's garden shed, playing around in fascination with the unfamiliar contents. In the 1990 movie The Chronicles of Narnia: the Silver Chair characters Eustace and Jill enter the mythical land of Narnia through one.

Where there's smoke there's fire so they say and certainly many an interesting item has been found in an old garden shed. Antique collectors will tell you that numerous items of value have been found in the depths of one.  Police officers are often intrigued by the contents of sheds. Just about any police department in the world will tell you that they've found everything from drug labs and stolen goods to dead bodies in back yard sheds. 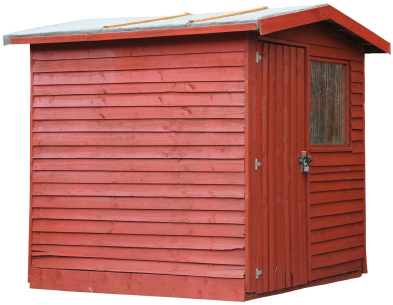 But perhaps nobody made use of the garden shed mythology quite as well as directors Peter Jackson and Costa Botes did when they made the infamous New Zealand 'mockumentary' Forgotten Silver. The film caused quite a stir. Appearing on New Zealand television in 1995 posing as a documentary, the film chronicled the discovery of old film reels in a garden shed that apparently belonged to the late Colin McKenzie. The items had 'been discovered' during the clean up after his passing.

The film featured Peter Jackson himself and the audience was convincingly told that the discovery proved beyond doubt that McKenzie had in fact been the first in the world to make a talking movie, which of course made New Zealand the first country to produce a talking movie. A little further into the film and the audience was asked to believe that McKenzie - and therefore New Zealand - was also the first in the world to discover colour film. It took quite some time for most people to realise that the directors were having everyone on. In fact, a lot of people didn't realise until the furore in the media the following day. The film was a hoax but it seems not everyone appreciated the tongue in cheek tall tale.

Perhaps there's a little of ET in all of us - entering a garden shed is like entering another, sometimes make-believe world.

NHS Blue Light Card Discount - Save 15% on all Asgard Sheds At Asgard, we truly value the emergency services...

All Asgard orders are being accepted and processed as normal, for delivery in September. However, we have extended our delivery times a little on all Asgard products.