Store your electric bike in an Asgard

Electric bikes continue to amaze. In particular, the sale of e-bikes in the number one market of Europe the Netherlands. Or has Germany taken over the leading role in sales in this particular bike catergory? 2011 e-bike sales in the biggest economy of Europeare estimated at around 200,000 units. Holland the number 5 economy of the 27EU member states did only slightly less. 178,000 were sold; up 7% on the figure for 2010.

This ongoing growth is amazing. In particular for theprofessionals in the Dutch bike sector. Most of them reckoned that sales would level off as the first signs of saturation were supposed to kick in. That didn't happen.

Despite a very cold 2010, 2011 winter that hampered bike sales during the first months of last year; the end of the year tally of e-bikes sold still shows a healthy figure. Even more amazing when the very wet summer of2011 is taken into account.

During July and August sales of regular city bikes were really badly hurt. Drops of 25% to 30% were recorded when the number of bikes soldwere compared to the period for 2010. But, evidently the rain showers during last year's summer didn't affect the high spirits of the e-bike buyer. And that didn't happen only in Holland.

Germany also suffered from a very wet and cold summer. But,e-bikes continued to be sold in big numbers. The biggest bike maker in thecountry 'Derby Cycle' managed to double its sales of electric bikes to closeto 90,000 units.

Electric bikes took up 15% of all bike sales in Holland in 2011.Such a market share, which is expected to grow even further in the coming years, calls for organizing a Dealer Congress. And that's exactly what Bike Europe's sister magazine Tweewieler did (for the second time) last December. 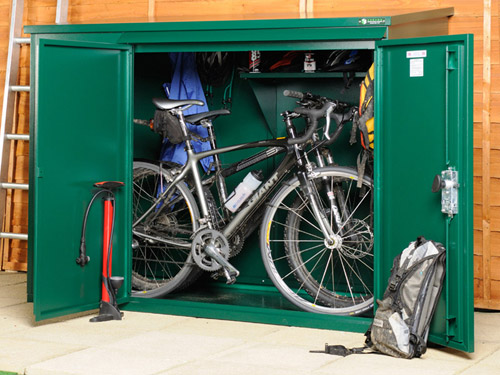 As I am the editor of Tweewieler too I was happy to be involvedin organizing that Congress. In this issue of Bike Europe you can find a comprehensive report on this event that was visited by close to 300 bikeprofessionals.

To sum up some of the important conclusions of this e-MobilityCongress; e-bike sales in the Netherlands will grow to a 25% market share inthe coming years. This means that the market will grow to about 300,000 units.

Another conclusion was that by 2020 another e-bike category willhave emerged which is expected to spike sales even more than e-bikes are doing now in Holland and Germany (and soon also in the rest of Europe). That category is made up by an electric vehicle that is a kind of cross-over of an e-bike andan e-scooter. The motorcycle industry is also convinced that such a new category will impact the market in the coming years; see the report on the ACEM conference elsewhere in this issue.

Store electric bikes and more in an Asgard cycle shed