An independant review from a motorcycle forum.

OK folks, it's the one you've all been waiting for - judging from the sarccy messages and ill-informed comments I've seen on the site since I posted my first thoughts on the bike shed that now houses my Multistrada... I give you the Asgard motorcycle shed project!

The problem: I have space in my front garden for a garage but would never be able to obtain the agreement of the co-freeholder of the land to erect a garage in it, let alone one of those pig-ugly shipping containers so beloved of at least one forum member (who presumably lives in a war zone!) That's without even going into the issue of the planning permission required by some local authorities for permanent garden structures, which is far more likely to be granted for one of these bike sheds than either a garage or a flaming shipping container - but check with your local authority as you may not even need it.

The solution: Asgard's motorcycle shed. It's plenty big enough for one sizeable bike such as a Multistrada or two small bikes - with space to spare for biking paraphernalia (I keep my panniers, helmet,  leathers, waterproofs and tools etc in it along with my Multi). 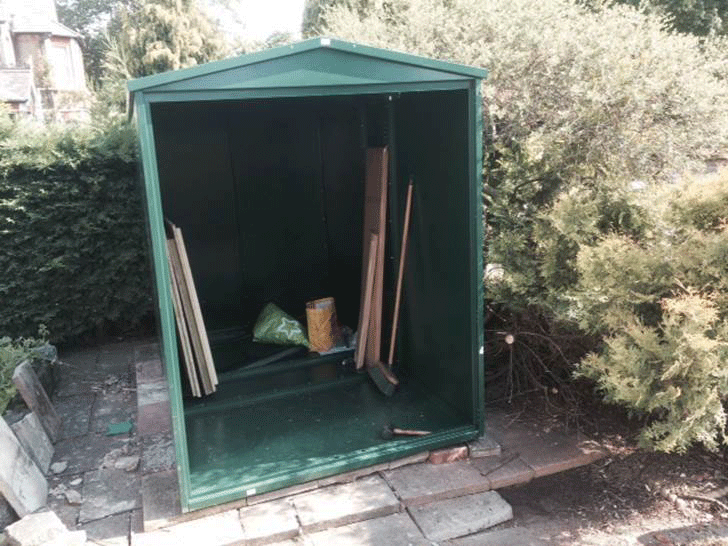 Tip 1: First and foremost make sure your base is solid and level. If you don't, you WILL run into problems! Concrete, flagstones or paving stones, probably in that order are best.

Tip 2: Get a mate to help you. I've ignored warnings that jobs can only be completed successfully by two people and got away with it. You won't with this: some of the roof panels are so solid and heavy that one person couldn't lift them into place. I couldn't have done it without fellow biker Seth (pictured in the comedy hat!) At one time he owned three  Ducatis simultaneously: a 250 Desmond, an immaculate black-and-gold Seventies Desmo SS and a Darmah.

Tip 3: Make sure you have plenty of beer on hand to reward your co-worker with. It's quite thirsty work!

Secure storage: As you can see from the pics here, the Asgard shed isn't one of those flimsy DIY store jobs ideal for keeping seeds, bulbs and garden tools in. It's a solid piece of kit with several nice features that make it impossible for all but the most determined thieves to break into. These include concealed fixings and a decent key-operated door lock that the company says that company says is insurance approved. But I'd check that with your insurer.

Discount: I almost hesitate to say this in case I am again accused of working for the company, which I don't, but I've contacted Asgard on the forum's behalf  and negotiated a discount. The firm is running a sale at the moment but site members who quote  DUCATI5 when placing their order will benefit from a further 5% discount.  You know what they say, "Every little helps".

Did you know Asgard secure steel storage offers a 10% discount to cycling clubs and their members to safely store their bikes?