How to cycle in the snow safely

Snow beater: put on your knobbliest tyres and get pedalling

Travel disruptions mean cycling, with a few adjustments, may be the best bet for getting to work vaguely on time. 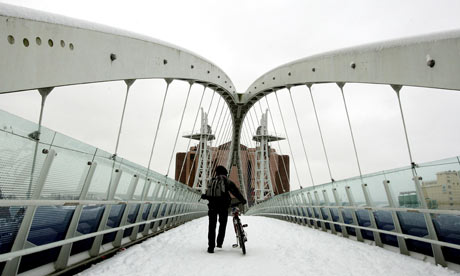 Snow, for many, is already here. And after I'm done writing this, I'm going to put the knobbliest tyres I have on my bike for this morning's commute.

I've got used to riding with a big crowd of cyclists on my way to and from work, but I suspect that as it has snowed overnight in London, the rank and file of two-wheeled commuters will be thinned out substantially.

But really, there's no need to leave the bike at home, just because of a bit of the white stuff. In fact, with bus, train and London underground services reduced by the inclement weather, cycling might be about the best bet for getting to work vaguely on time.

Only ice is the real no-no, but riding a bike in snow is not only easy, it's even fun. And you get the added kudos because people think you're incredibly intrepid getting to work, as though you'd just pedalled to the South Pole or something.

With all the hype about the winter weather, I did start web searching for some serious winter tyres the type with metal studs that will bite and give grip even through hard-packed icy snow. I found a very useful article on tyre choice from this New Hampshire cyclery, but there's so little demand for studded tyres in the UK that these products are hard to source, and by the time your order arrives, the snow will almost certainly have disappeared. So I'd suggest that unless your commute takes you over the Cairngorms, a pair of studded tyres for £70 is a slightly over-the-top technical fix for a problem that occurs a day or two a year at most.

Assuming, then, that we're doing cycling in the snow the cheap and cheerful way, I've got a few tips, but I'd be interested in yours, so please share below.

Taken from the dailymail online