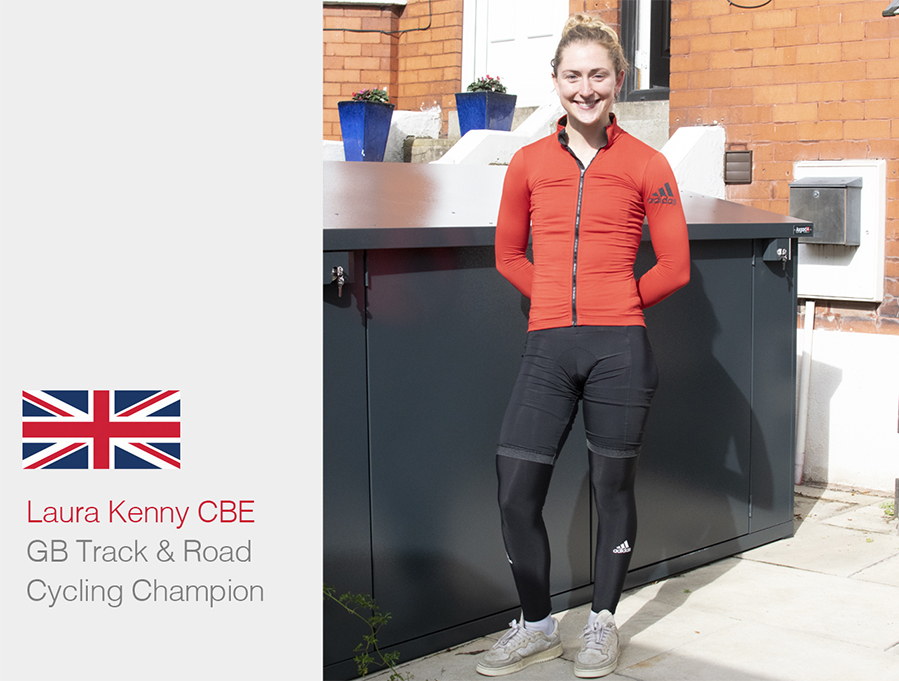 Back in 2017, Team GB Cyclists Laura and Jason Kenny reached out to Asgard to find a secure storage solution for their garden, well, after three years Laura came back to Asgard for bike storage advice.

Laura needed advice from Asgard on which of our range of secure bike sheds would be the best one to house the abundance of bikes and accessories in her new home. After discussing the level of storage and security Laura needed, Asgard decided two Access 29ers Bike Sheds would be the perfect fit, each of these bike stores can house up to 4 bikes each*. With its gas-assisted lid and double door access, this bike store design makes life a lot easier, just grab your bikes quickly for that ad-hoc ride or store bikes away in seconds. Laura wanted a unit that could be bolted down to the ground as the sheds would be at the front of the house, giving that extra bit of bike security.

‘We have been lucky enough to have been using Asgard sheds now for many years. The team are so helpful providing me with information so I select the right one. We have had them fitted and put them together ourselves and both have been seamless. I wouldn’t hesitate recommending these sheds to anyone. Our bikes feel safe and secure.’ - Laura Kenny, Olympic Gold Medalist.

Who is Laura Kenny?

Laura Kenny has taken the cycling world by storm after winning four Olympic Gold medals at the 2012 and 2016 games. Her wins to date make her the most successful British Olympian. Outside of the Olympics, Laura has won 12 World Championship titles, 10 European Championship titles, and a Commonwealth Gold.

Laura has an OBE and CBE, the latter awarded in 2017 in Buckingham Palace. Laura is due to take part in the Tokyo Olympics and everyone at Asgard wishes her the best of luck!

Why did Laura pick the Access 29ers Bike Shed?

*depending on make and model of bike.