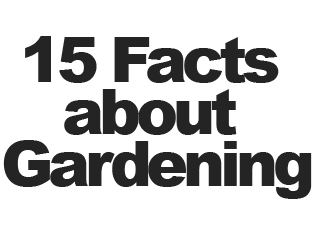 It’s that time of year again! Depending on how it feels, the British spring can be a delightful time to be in the garden. Nothing beats the joys of spending a full day in your garden potting new plants and getting everything in order. But something that we all love and do also has some rather amazing facts that you’re likely not to know!

1. Bamboo is the fastest-growing woody plant in the world; it can grow 35 inches in a single day.

2. Under the London Royal and Other Parks and Gardens Regulations (1977), “touching a pelican” is forbidden without written permission.

3. During the 1600s, tulips were so valuable in Holland that their bulbs were worth more than gold. The craze was called tulip mania, or tulipomania, and caused the crash of the Dutch economy. Tulips can continue to grow as much as an inch per day after being cut.

4. A survey in 1999 listed “garden too small” as the eighth most common reason for hating a house.

5. Vanilla flavoring comes from the pod of an orchid, Vanilla planifolia. Though the pods are called vanilla beans, they're more closely related to corn than green beans.

6. In 2002 research showed that sprinkling coffee grounds in the garden helps deter snails and slugs.

8. Saffron, used as a flavoring in Mediterranean cooking, is harvested from the stigmas of a type of fall-blooming crocus, Crocus sativus.In 1995 a gardener in Norway was the first man to be convicted of being drunk in charge of a lawnmower as he drove one between two gardens.

9. Garden gnomes were brought to England from Germany in 1847 by Sir Charles Isham. He hoped they would attract real gnomes to his garden.

10. Snapdragon flowers resemble a dragon, and if you squeeze the sides, the dragon's mouth will appear to open and close.

11. Gnomes are banned from the gardens at the Chelsea Flower Show.

12. Wellington boots with individual toes were first modelled by the Japanese garden designer Koji Ninomiya at the Chelsea Flower Show in 1995.

13. Trees are the longest-living organisms on earth.

14. The African golden mole is more closely related to the elephant than to the garden mole.


« Back to all Blogs