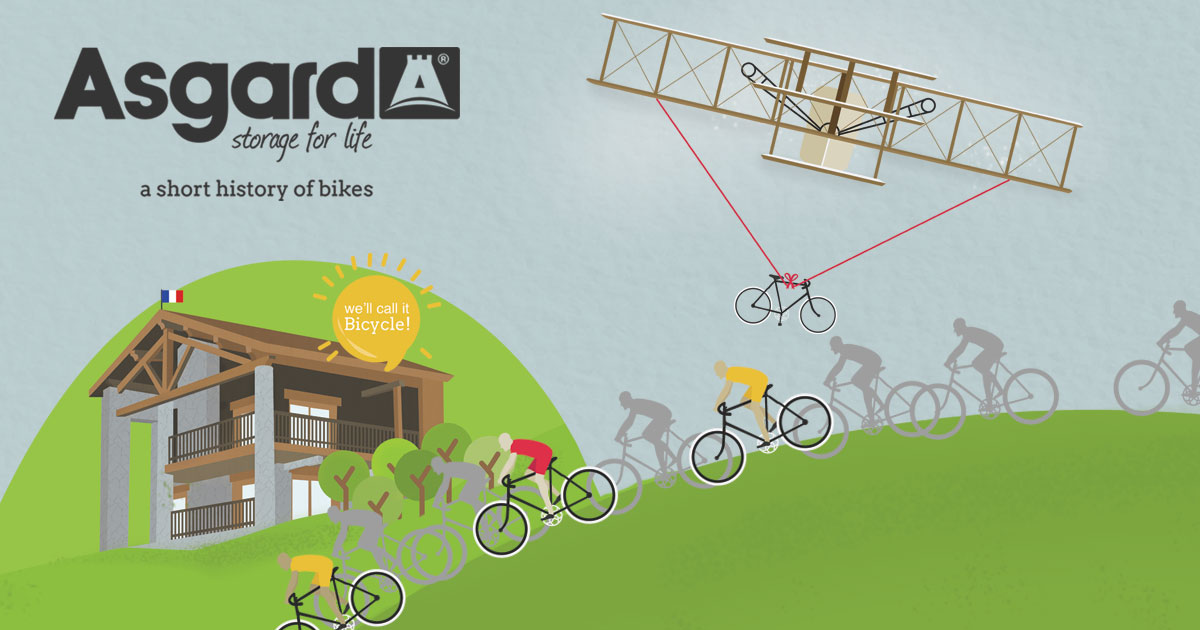 We know a lot about cycling, more so about keeping them safe in our bike storage sheds. The team at Asgard have helped out cyclists who have represented Great Britain in the Olympics, played around with apps such as Strava and taken part in numerous cycling events. We’re a keen bunch!

We strive to bring you the best cycling news, but today we’d like to give you something a little more fun. As the saying goes, 'You learn something new every day', we want to give you 10 new things about the wondrous world of cycling.

The team at Asgard not only make highly secure cycle sheds but they also know their cycling facts and trivia!

Take a look at our really cool cycling facts infographic.

1. The term “bicycle” was not introduced until the 1860s when it was coined in France to describe a new kind of two-wheeler with a mechanical drive.

2. Orville and Wilbur Wright, the brothers who built the first flying airplane, operated a small bike repair shop in Dayton, Ohio. They used their workshop to build the 1903 Wright Flyer.

3. Fred A. Birchmore, 25, circled the globe by bicycle in 1935. The entire trip, through Europe, Asia, and the United States, covered forty thousand miles. He pedaled about 25,000 miles. The rest was traveled by boat. He wore out seven sets of tires.

4. There are over a half billion bicycles in China. Bikes were first brought to China in the late 1800s.

5. Americans use their bicycles for less than one percent of all urban trips. Europeans bike in cities a lot more often—in Italy, 5 percent of all trips are on the bicycle, 30 percent in the Netherlands, and seven out of eight Dutch people over age 15 have a bike.6. About 100 million bicycles are manufactured worldwide each year.

8. Over the past 30 years, bicycle delivery services have developed into an important industry, especially in cities, where the couriers have earned a reputation for their high speed and traffic-weaving skills.

9. The Tour de France is one of the most famous bicycle races in the world. Established in 1903, it is considered to be the biggest test of endurance out of all sports.

10. In 1817, Karl von Drais, a German baron, invented a horseless carriage that would help him get around faster. The two-wheeled, pedal-less device was propelled by pushing your feet against the ground, The machine became known as the “draisine,” and led to the creation of the modern-day bicycle.

All facts are extracted from;

Well, there you have it! You can now tell your friends all about these new exciting facts! Who knows, it might even prove useful at the pub quiz.