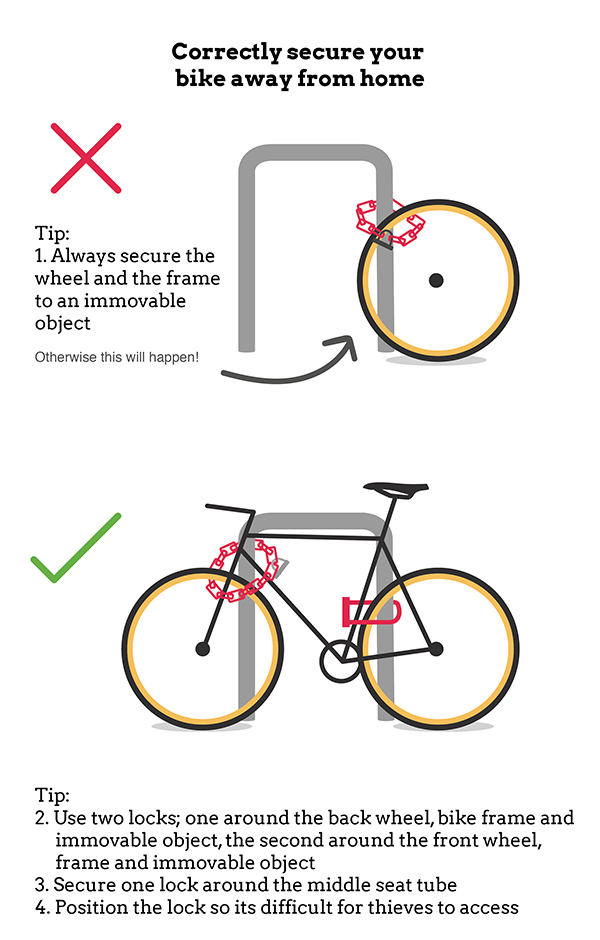 In the UK, a bicycle is stolen every minute and less than 5% of those are returned to their owners. The latest International Crime Victim Survey estimates that cyclists are more likely to have their bikes stolen than motorcyclists their motorcycle or car owners their car (ICVS, 2007). Its not surprising then that cycle theft is found to be the single greatest deterrent to cycle use after fears concerning road safety.

There are two kinds of theft related to bicycles:

1. Theft of bicycles describes the theft of the cycle frame and its components

2. Theft from bicycles describes theft of components and accessories such as lights, seats and wheels. As bicycles are of composite construction they are particularly vulnerable to component theft, especially 'quick release' features

Despite the high incidence of cycle theft, many go unreported to the police. This makes understanding the problem of bicycle theft difficult as police data typically under-represents the problem. This is illustrated by data from the International Crime Victim Survey (2000), which shows that across the 17 countries surveyed, on average only 56% of bicycle thefts were reported to the police. Similarly, in England and Wales, a comparison of police recorded statistics with estimates from the British Crime Survey (BCS) suggests a four-fold difference in the extent of the problem.

Interviews with bicycle theft victims indicate that under-reporting is largely due to them believing that the police are not interested in tackling bicycle theft nor can they do anything about it, both in terms of catching the bike thief and returning the stolen bicycle. A further reason for an under-representation of the problem is that many police departments record bicycle theft in different ways, for example, a bicycle theft may be recorded as a burglary from a residential property. However inadvertent, these issues relating to reporting and recording may serve to conceal the full scope of the problem

Securing your bike at with Asgard